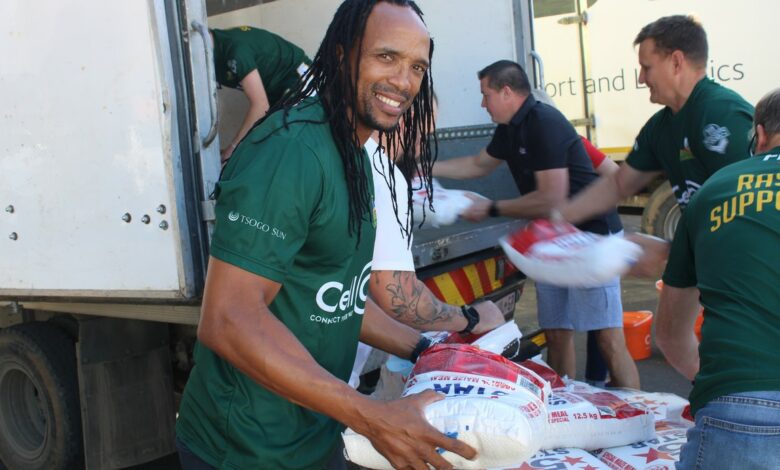 THE KZN Relief Initiative was supported by various role players to help distribute more than 500 food parcels to those left destitute by the recent floods.

These food hampers will feed 3 000 people. Rugby legends and current players helped load trucks that were destined for communities in the Asherville and Jacobs areas.

“We have seen, first-hand, the impact KZN floods have had on communities in KZN, and initiatives like Rugby Unites are needed now, more than ever. We encourage everyone to get involved in giving back to their communities in some way. SA Harvest, who collect and redistribute surplus food to beneficiary organisations, are a partner of SARLA and the Sharks hence why we wanted to give back in this way.

“This was a joint effort between our sponsors and stakeholders to provide some relief to flood affected communities. The two communities we visited were identified by Lindsay Hopkins of food rescue organisation, SA Harvest. We helped distribute 500 food parcels, 500 bags of maize meal, as well as nappies and other goods to those affected and we hope this will go some way into alleviating some pressure on those in need,” Chapman said.

Lindsay Hopkins of SA Harvest thanked the legends and players and also paid tribute to various non-governmental organisations who contributed to their efforts.