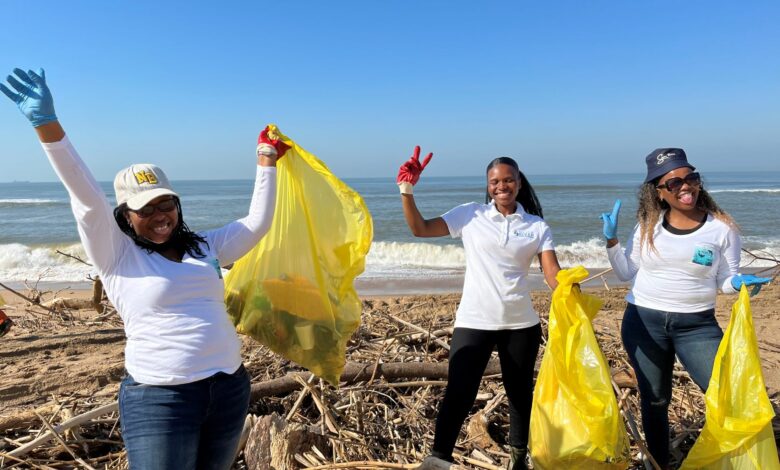 Beachwood gets a much-needed tidy-up

Home » Beachwood gets a much-needed tidy-up

BEACHES around Durban were left in a devastated state following the April floods.
Clean-up operations began at the first sight of sunshine after the rainy weather, and have not stopped since then.

Sibaya Casino has since worked with Adopt-a-River to clean up the beach near Beachwood Golf Course that was also badly affected.
Numerous beaches in KwaZulu-Natal had been affected, some worse than others, and some had already been attended to.

Beachwood, however, which is open to the public and frequented by dog walkers, fishermen and families, had not yet been cleaned extensively.

The casino recently donated gloves and volunteered their time to clean up the beach that was impacted by the heavy rains and floods.

“This particular stretch of beach has not been cleaned properly since the first floods, and our aim was to make a difference by highlighting how important beaches are as part of the natural ecosystem.

This clean-up was done in conjunction with Oceans Alive, other corporates and NGOs and individuals, all of whom are lending a hand,” said Solomon Khumalo, Sibaya’s Safety, Health and Environmental (SHE) manager.

In April, the golf course itself was closed indefinitely because of the floods that hit the province in April and May.
As far as possible, the debris will be recycled after being sorted.

The aim of the clean-up was not only to restore the beach but to create public awareness of the impact of human actions on the ocean which quietly carries the weight of those actions.

Adopt-a-River director, Janet Simpkins. said the organisation was grateful to all stakeholders in the community who came out to lend a hand.

“We can all help to clean up our rivers and oceans, and it only involves changing some of our habits at home – think before you wash chemicals down your drain, be selective in your packaging options – look to reusable coffee cups, carry your own water bottle, stay away from single-use plastics and always recycle,” said Simpkins.