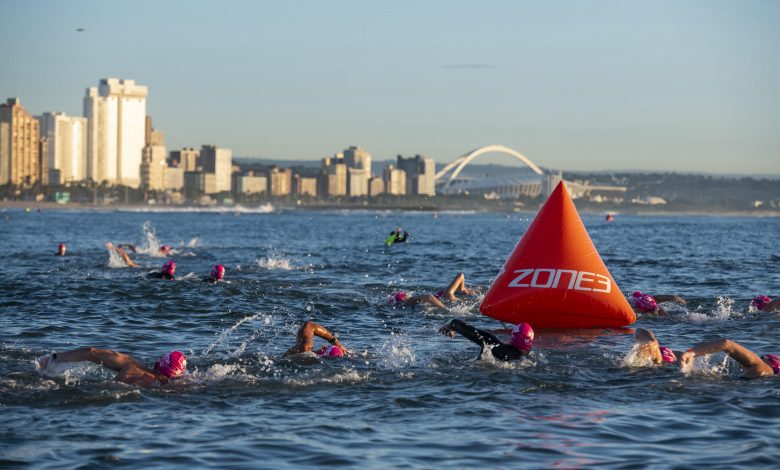 WITH perfect weather and ocean conditions on offer, the four swims making up the World Oceans Day Swim organised by Breathe Conservation started with an announcement from ultra-swimmer Sarah Ferguson that she plans to swim from Durban to Cape Town to further her ocean conservation goals.

Ferguson, a Durban North resident, was part of an enthusiastic field that took on the five kilometre race in calm and warm sea conditions as part of a collective statement from swimmers to deal head-on with the scourge of plastic pollution in the oceans as part of the global World Oceans Day initiative.

Pool and lifesaving star Leshen Pillay won a dice to the beach finish from Tory Earl and Sven van der Linde at the end of the five kilometre race, and said that he had been lucky to catch a small wave in the closing stages.

“I was grateful to catch that little bump to get in front of Tory (Earl). I thought she was going to catch me on the run and I nearly tripped getting my feet out of the water. The conditions were exceptional today and the pool swimmers do well when the conditions are flat,” Pillay said.

As the swimmers gathered for the 7am start of the first race, organiser and the driving force behind Breathe Conservation Sarah Ferguson announced to her fellow swimmers that she plans to swim from Durban to Cape Town in the coming year to further the work that Breathe Conservation is doing.

“It is a long way but I am super excited about it,” said Ferguson, whose Guinness World Record non-stop swim around Easter Island is documented in the book Swimming Easter Island. We are going to start in March next year and see how far we get. We will do it in stages, with time during the winter to do educational visits to schools between May and December.

“By spreading it out over a year we hope to maximise the exposure and increase the following and awareness. Logistically it is a massive project, both the swim and the educational aspect, so we are giving ourselves a full year into 2023 to complete it. We really want to create behaviour change in as many people as possible around plastic in the ocean,” Ferguson said.