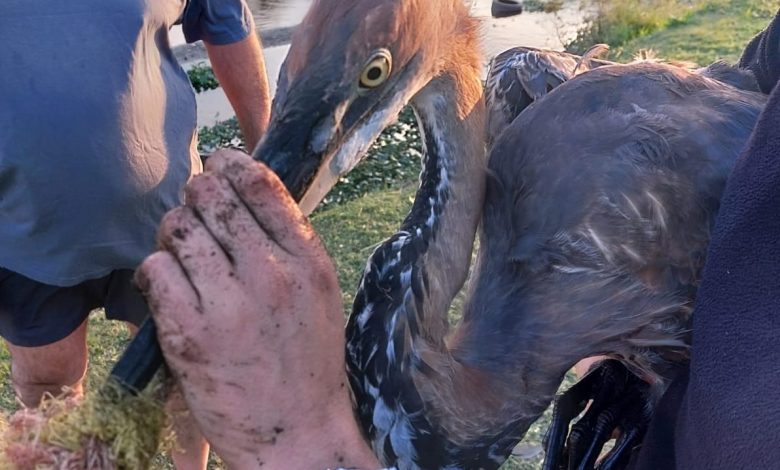 Goliath Heron on road to recovery at CROW

Home » Goliath Heron on road to recovery at CROW

AFTER more than two weeks of recovery at the Centre for Rehabilitation of Wildlife (CROW), the Goliath Heron is reportedly on the mend and has gained back much of its former strength.

The majestic bird was initially found in a pond at the Bluff Golf Course with orange netting wrapped around its beak.

“Our first attempt at catching the bird was unsuccessful as he was fully flighted and wouldn’t let us anywhere near him. The dam that he made himself refuge in had incredibly thick substrate which made climbing in to catch him extremely difficult,” said CROW’s spokesman, Alexandra Kögl.

The team then came up with alternative methods to catch the bird, one of which was to construct a trap large enough to secure him in after being lured in with food.

“His condition deteriorated quicker than the trap could be built and we ended up being able to launch on the bird, freeing him of the netting,” said Kögl.

She said the netting shut the bird’s beak closed and made it impossible for it to eat or drink.

“He was losing weight and strength very quickly and we are so thankful that we were able to catch him in time. He is now free of the netting and is recovering well at CROW,” she said.

Kögl noted the heron has since been moved to a larger aviary to help with his recovery and the team at CROW looks forward to releasing the bird soon.