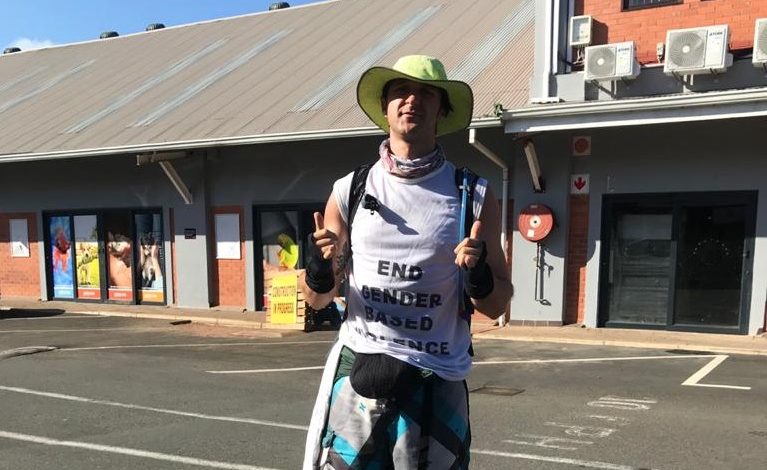 DURBAN North resident, Andrew Lusk (29) has embarked on a mammoth run from Durban to Johannesburg to raise awareness about gender-based violence. The runner had just set off on his journey when the Northglen News checked in to find out more.

“I had just R200 in my pocket when I left,” said Lusk who began his run on Friday, 5 March – setting off on the N2 Highway near Chris Hani Road in Redhill.

Lusk who has dubbed his journey, The Road to Hope 2021, has set up a WhatsApp group to share updates with his supporters. He said he hopes to further highlight gender-based violence while it is already under a spotlight following the Covid-19 lockdown when cases of abuse rose.
“It was the final straw, I just couldn’t take another bit of bad news. I had to do something to make sure it was a good moment for me and South Africa,” he said.
Lusk said he has encountered several challenges since he started his run.
“My first challenge was to get onto the N2. It was very scary running on the highway at first. I didn’t know how to tackle it, I just knew I had to get on the road and go, so I went for it. It was very scary running all the way up to The Pavilion mall,” he said.
Lusk said he faced another challenge when he reached Hillcrest.
“The second challenge was that I needed a phone to track my statistics and prove I had done the run. A lot of people helped me with donations. I received R1800, got a cell phone and I was off to Pietermaritzburg,” he said.
Lusk said the run is aimed at uniting the country.
“One run doesn’t fix gender-based violence. A lot of (the problem) is alcohol abuse -I am still trying to find out where the problem is. The run is to unite South Africans,” he said.
The Independent Crisis Team in Durban North offers counselling and assistance to victims of gender-based violence free of charge.
The team’s trained volunteers are available 24/7 to offer guidance and support in relation to domestic violence, drug related issues, family issues and trauma. For more information, call Carol Von Tonder on 084 810 4469.
Source: northglennews.co.za