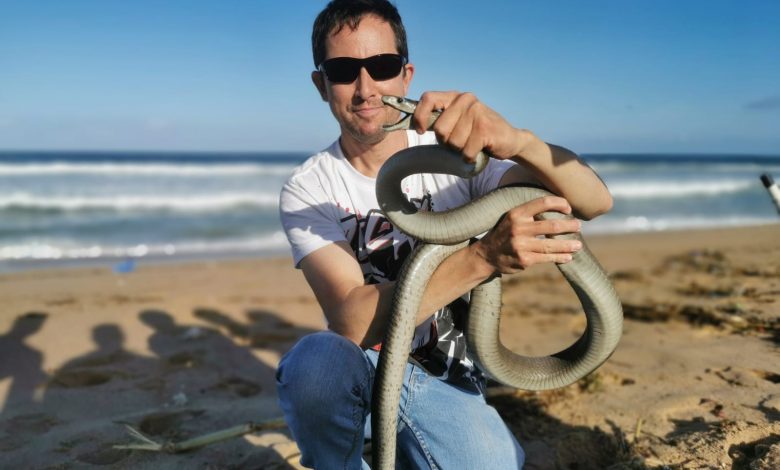 According to Arnold, black mambas are not coastal species but recounted that a similar incident of a mamba washing up on Durban’s Addington Beach occurred during lockdown last year.

“I initially got a call from an angler saying they spotted a large snake riding the waves to get to shore. I asked if they could send me a photo and sure enough it was a black mamba. I just told them to make sure no one gets close to the snake and to ensure any beachgoers with dogs to keep away.

“They kept an eye on the snake and when I got there the mamba had been dragged back into the ocean by the surf. When it eventually got to shore again I could tell it was exhausted but cautious and I was able to determine it was a female black mamba. She initially struggled when I picked her up but eventually settled as she knew I wasn’t there to harm her. She is around 2.3 metres in length and is missing some of her tail,” he said.

Arnold said he suspects the snake was washed down a stormwater drain because he spotted an outlet on the beach a few metres away.

“I’m assuming it could have been from the heavy downpour earlier this week that flushed her out. My plan now is to nurse her back to health before releasing her in a suitable area,” he said.